Breww supports multi-turn batches, allowing you to specify how many times you need to brew (each brew being a “turn”) in order to reach your required in-vessel volume.

Setting up a batch for multiple turns 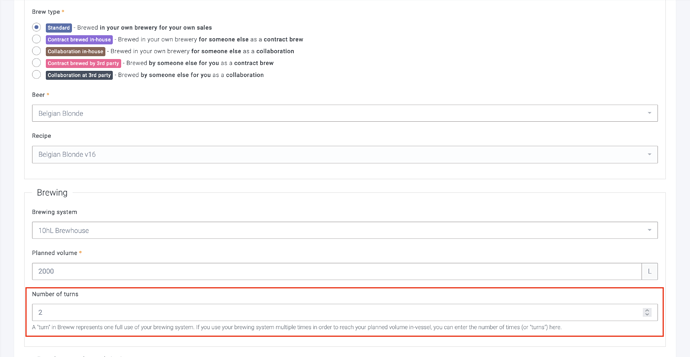 You’ll be able to see the planned turns and their current status on the batch itself. 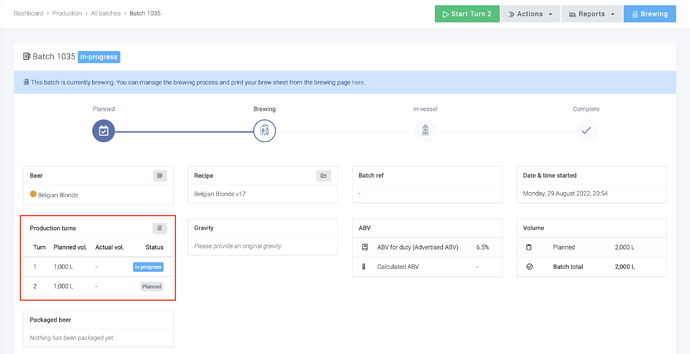 You can start the next turn by clicking the Start Turn X button on the batch, or from Brewing → Start Turn X. 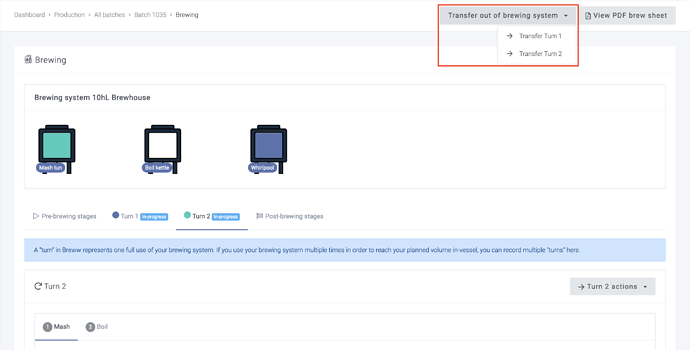 You can have multiple turns in the same brewing system at the same time, so if you start the second turn whilst the first turn is still in the brewing system, Breww has you covered.

By setting up the component brewing vessels within your brewing system, for example, a Mash tun, Boil kettle etc., you can record the volume transfers between each within Breww.

To record a transfer between your brewing vessels, simply click the turn’s tab within the from the batch’s brewing page Turn actions → where you can either Add volume to brewing vessel or Transfer to the next brewing vessel.

Enabling multi-turn on a recipe

In order to use a recipe on a multi-turn batch, Breww needs to know which stages of the recipe should be repeated per turn and which happen only once per batch. 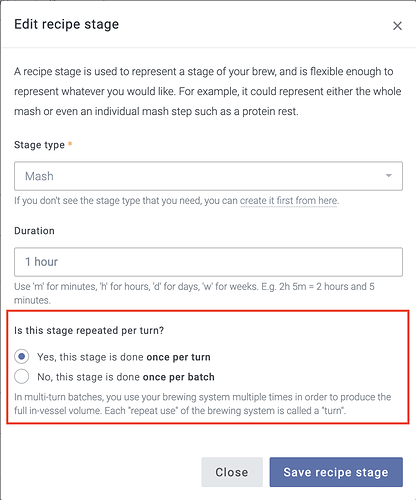 These recipe stages will then be repeated per turn on the batch’s brewing page, allowing you to record readings for those stages per turn, and appear multiple times on the PDF brew sheet. Ingredients can be assigned either to the entire brew day, or an individual turn.

How are ingredient quantities scaled?

Please see our other guide on this topic:

How does Breww scale the ingredients on batches (and how does this change with multi-turn batches)? Help docs & tutorials

Breww follows the following steps when determining how to adjust the ingredient quantities added to a batch from a recipe. First, Breww checks whether you’ve chosen to Scale recipe quantities to match batch volume. If so, Breww calculates the ratio between the recipe’s volume and the batch’s planned volume and multiplies all ingredient additions by this ratio to get the quantity to add for each ingredient addition. Next, Breww checks if this batch is a multi-turn batch. If it is, Breww goes th…

5 Likes
How does Breww scale the ingredients on batches (and how does this change with multi-turn batches)?
Transferring Double Brews into fermentation vessels
laurie-davies 8 October 2021 10:26 #2

What about when we brew a batch that goes into two fermenters? How can that be assigned when we create batch (because the drop down window doesn’t allow choosing two fv’s). thanks, Laurie

Welcome to the community!

For batches that go into two fermenters from the brewing system, you currently need to create a “Fake” vessel, then move the batch into that before then splitting it into the correct vessels.

We have planned on our roadmap to add the ability to split batches directly from the brewing system, so as soon as that’s done I’ll notify you here!

I am struggling with something similar to thisright now as well. I brewed a base beer to split two ways and add ingredients too, but I can’t seem to change the name of one batch without it changing the name on the other. It’s leaving me pretty confused. am I missing something?

Have you split the batch into two vessels (moving some volume from one to another while leaving some volume behind)? This can be done and Breww will prompt for whether you’d like this to be two batches or remain as part of the same batch. I have attached a screenshot below for your reference. 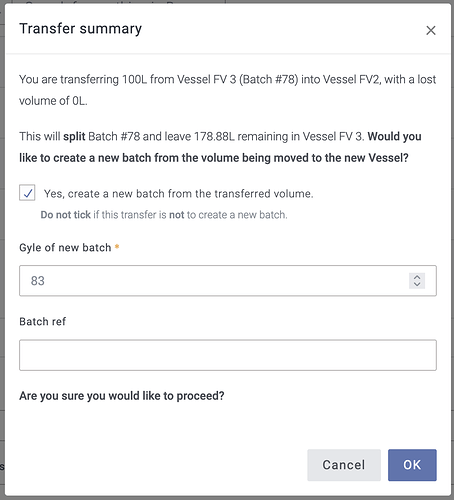 If you split into two batches, then you can change the beer of the second batch. Alternatively, it may be worth looking at “Derived beers” as this might work well for you, depending on how different the beers are. I have included some information on ‘Derived beers’ below for you.

I hope that helps.

Hi ,
I’m new and just getting to grips with Breww. The multi turn feature would be really handy for me and I wondered if there was any update?
Thanks for your help.
Euge

Apologies for the delay in replying here. This feature is starting development now, but it’s a big & complex one, so we expect it to take a number of weeks to be completed, but we’ll update you when we know more. Thanks for your patience with this.

Great news to see this feature in.

Here is an example of our steps for making sour beer:

Notice how the number of turns for brewing is different from the turns for boil after souring.
Also notice the fermenter used for souring is not dedicated for sour, it can be used for regular fermentation.

How could we make this use case fits within the new multi-turn feature ?

Thanks for this, super useful.

In terms of additions that are once per batch, but dependent on the number of turns (say dry hopping is done once, but is based on grams/litre so dependent on the number of turns), is there a way to do this? I guess right now you can just repeat the dry hop stage per turn, but then that looks like multiple additions when really it’s just an amount that scales with the turn numbers.

Plan on trying this out tomorrow - looks good so far - if I’m right in thinking that I now only need one ‘Mash’ stage .etc per recipe, I can just enable multi-turn on the appropriate stages? This will save time in recipe formulation.
Second thing I couldn’t figure out - is it possible to show mutli-turn - multi-day batches on the batch schedule, so we can see when our brewhouse is tied up? It’s somewhat common to double batch across 2 (or more) days into larger FV’s to save on yeast.

1 Like
Allow recording the number of days that a brew will take and block the brewing system on the schedule/calendar
cornel-ianculovici 1 September 2022 10:27 #11

I have an answer for this markc because we just found out the hard way that my original interpretation of how it works was wrong!

You create a single-brew recipe (in our case 1400L) and set everything except fermentation to repeat per turn.

You set your dry hop amounts in the fermentation section to be the correct amount for a single brew (1400L).

When you create a batch for a double brew, you set the volume to 2800L, 2 turns and “scale my ingredients”.

Brew will then double everything, but it will split the mash+kettle ingredients into two separate turns (i.e. the grain and kettle hops get doubled first, then split in half to create 2 turns).

The dry hops get doubled in the fermentation section as required.

The only thing that’s a problem in our case is that yeast doesn’t necessarily work this way. e.g. when we brew a single batch we use 2 bricks of dry yeast, and for a double we use 3 (not 4). I’ve had to work around this by setting the single brew amount to 1.5 because we mostly brew double-batches. This isn’t ideal, but it’ll do.

Hi all - apologies for the delay in getting back to you on all of your questions!

@alyce-brin This isn’t currently handled by the new multi-turn functionality, but it falls nicely into our future development plans for it! We are looking to allow defining your own production stages, underneath which you would be able to have differing numbers of turns. So, for example, you would be able to create a new stage called “Souring”, in which would you could define the number of turns you’re looking for and then set up another stage where you could define a different number of turns required. To do what you’re looking for in the existing structure, you will need to treat the two “Boil” stages you’ve defined as a single movement between vessels.

@markc We’re looking to add that grams/litre customisability, and other “Quantity calculations”, e.g. Alpha acid content affecting the quantity, as the next phase of our production updates. We wanted to get in multi-turn functionality first, as it obviously affects how volumes are handled on brew day and beyond - so now we can leverage that in this next phase. Although for a dry hop grams/litre example, would this be driven by the batch’s total volume rather than the number of production turns? @cornel-ianculovici that’s a really useful example; thanks for that! We can certainly make sure that the “Number of turns” is available when setting the quantity calculations. And that process breakdown is exactly correct

@steve-neal You can’t schedule the brew day to be over multiple days, but adding the ability to simply say “Brewing is over X number of days” would be super simple and something we could just let you specify on a batch and display on the calendar - if that’s would you’d be looking for it to do?

Thanks Max, that would be super helpful, just for the visual on the batch schedule view really so at a glance we can see what is happening each day/week.

Thanks, Steve, I’ve added this to the feature request area now

When creating/scheduling a batch, enter the number of days that the brew will take. At the moment, it’s always assumed to be one day. Thanks @steve-neal for suggesting this.

The above clarified something I didn’t realise, with doing multiturn manually I haven’t been using the scale recipe because it didn’t fit, but it now makes more sense if the non-per-turn sections scale based on volume

It’s a little confusing that they only scale with volume and not number of turns. Might be worth clarifying how the scale recipe and multiturn interact in the documentation?

Though g/l would be great eventually - as you say that makes more sense for scaling as though usually number of turns will map directly to total volume I can see some cases where that wouldn’t be true (say double mash/single boil). We can solve this for now with just scaling the recipes, ta!

Thanks Mark. Max is away on his honeymoon at the moment, so we’ll pick this up with him when he’s back to see if we improve things further, but I think the “Quantity calculations” feature coming soon should hopefully cover your situation of double mash/single boil.

The scaling does say that it’s based on volume when starting a batch (see screenshot), but there’s certainly scope to make this clearer both here and when creating a recipe, so we’ll see what we can do here too. 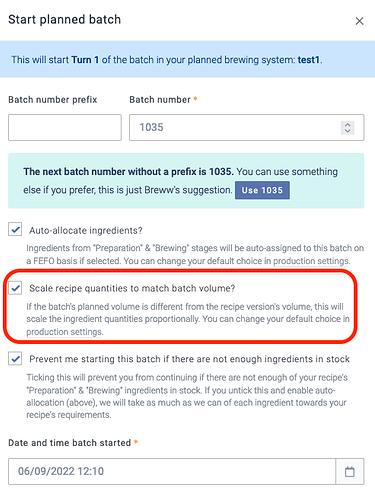 Thanks for the feedback, it’s much appreciated