How does Breww scale the ingredients on batches (and how does this change with multi-turn batches)?

Breww follows the following steps when determining how to adjust the ingredient quantities added to a batch from a recipe.

When you’re making a recipe and adding ingredients, you need to enter the full amount to use in total on the recipe. There is no need to anticipate how many turns will be done later and try to adjust for this as Breww will do this for you. For example, if in the recipe you enter 100kg of an ingredient, and then make a two turn batch, Breww will prompt you for 50kg per turn (assuming the batch volume is the same as the recipe volume).

Let’s assume you entered 330kg of a malt on a multi-turn recipe step and gave your recipe a batch size of 500 Litres then:

As you can see, the number of turns doesn’t impact the total amount of ingredients used, just the amount per turn (to reach the same grand total).

The rules to remember are:

As an example, we’ll use the following simple recipe.

Next, Breww then looks at each ingredient addition and whether it is part of a stage that Repeats per turn. As we are brewing this recipe over two turns, in our Mash and Boil, the quantity of each ingredient addition will be split proportionally amongst the turns, whilst our Dry hop additions won’t be. So Breww will add 100 kg of the total 200 kg of Maris Otter, and 20 kg of the total 40 kg of Citra, to each turn. The Amarillo is used in the Dry hop, which isn’t a Repeats per turn stage, so this stage only occurs once and has the entire 30 kg calculated earlier.

Breww supports multi-turn batches, allowing you to specify how many times you need to brew (each brew being a “turn”) in order to reach your required in-vessel volume. Setting up a batch for multiple turns When creating your planned batch, just enter the number of planned turns. Breww will then create your planned turns, splitting the planned volume evenly over each turn. [Screenshot 2022-08-29 at 16.15.31] You’ll be able to see the planned turns and their current status on the batch itself…

How do I turn recipe scaling on or off?

Scaling can be turned on or off for each individual batch (when you start it). When you start the batch, you should see this option: 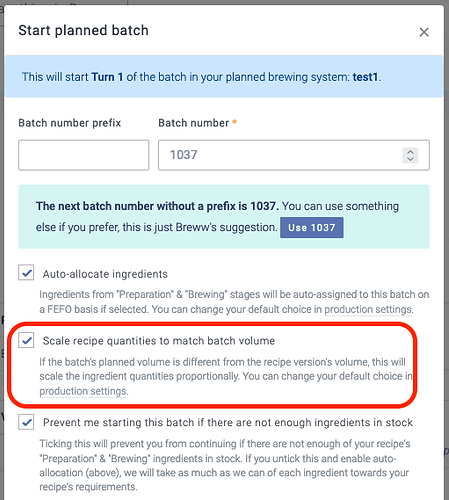 You can also choose if you’d like this on or off by default in Settings > Production settings.