How do I undo or correct a mistake made on a batch?

If you’ve made an error related to a batch, for example:

The first thing to check would be to see if you can undo the incorrect action.

If you go to the batch in question, click on the Actions tab near the bottom, you’ll see a list of actions performed against that batch. You can undo actions by clicking the undo button, on the Action line.

Some actions on batches can’t be undone, for example, if that action has actions following on from it (“child actions”). You also won’t be able to undo a racking if some of the racked products have already been sold.

If you need to undo multiple actions, you might need to do so in reverse chronological order (most recent first). 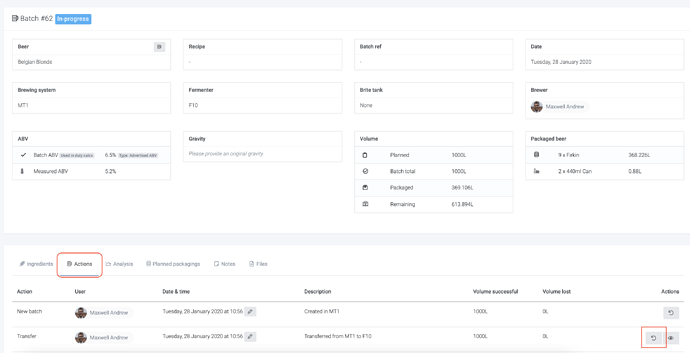 Just need to change the date/time of a batch action?

Racked into an incorrect container and unable to undo the racking?

If it’s not possible to undo a racking (for a reason that’s not easily resolvable), then you might be able to sort this out by transferring the beer from its current container to another container. To do this, see:

How do I rack directly from a container into another container, such as a minicask, keg or bottle? Containers